For the past two months, I have made it part of my weekend routine to participate in the Cracked Flash writing competition. They post a sentence and some inspiration images allowing writers 24 hours to come up with a 300 word story. All entries are posted to the comments. The following Wednesday, a winner and two runner ups are chosen.

This Wednesday, my story, “Her First Rodeo,” won.

This is my second time winning this competition, and I’m just as excited as I was the first time. In an world so full of rejections, it is refreshing to see somebody appreciated my writing – to see somebody gets me. Cracked flash is a unique competition that I would recommend to any writer.

One thing that sets this apart from other contests is the time limit. 24 hours is not very long. Because I have other projects I’m working on, papers to grade, and occasionally, people to see, I usually only have time for two drafts. One where I write the story and exceed the word count, then another where I cut back and improve the language. Some weeks my stories have flat characters and week plots. Some weeks, they are funny and dynamic. Twice, they have been good enough to win.

Winning does’t mean the stories perfect, and the judges know that. My favorite part of this competition is that their statements about the winners usually point out a few things they liked about the story and one or two ways it could have been better. While I can’t send my 300 word to a lot of publications because simply being on the web means it is “previously published” I could revise it and expand it until it morphs into a new story.

The short might be like a cucumber seedling. It starts out small, but turns into an enormous vine that produces dozens of delicious fruits. 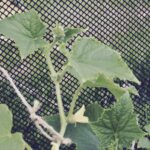 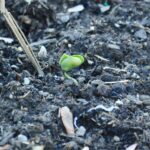 My 300-word story about a sheriff and his apprentice placing a tracker on an outlaw alien might just evolve into a 3,000 word story about those same to characters tracking said alien, apprehending him, and realizing he wasn’t a villain at all but a victim who was framed.

It will take a few months for this seedling to grow into sprawling vine, so please take a few minutes to look at this little green baby and don’t forget to visit Cracked Flash on Saturday for some #writing #inspiration.

The Cantina was dark place that reeked of stale beer. Horrid country was barely audible over the drunken shouts of ranchers–exactly the kind of place their quarry would hide.

“We’re gonna get killed,” muttered Molly. She was rookie, fresh out of the academy.

“Every man in here is carrying a gun.”

Molly wasn’t wrong about the guns, but Joe was unconcerned. They were a crucial part of his plan. He walked straight to the the counter and order a shot of whisky before shouting, “I’m looking for Greggor Tams. First one to give me intel gets fifty bucks.”

The men froze. Conversation ceased. The automated singer crooned about losing his wife, truck, and hamster while the click of safeties switching off improved the melody.

“We ain’t snitches,” said a man whose face resembled a raisen.

Joe grinned. No face matched his quarry’s, so he examined each gun and hand carefully, focusing on a gleaming silver pistol, held by a blue-tinted hand. Alien magic could create some good illusions, but the flaws always showed closest to objects from their home-worlds, especially laser-pistols.

He knew Molly had spotted it when she fainted.

“I ain’t askin nobody to snitch,” shouted Joe. “Just wanted to see how my apprentice held under pressure.”

“She didn’t hold at all,” laughed raisin face, putting his gun away.

“Next round’s on me.” Joe slipped three bills to the bartender, picked Molly up and carried her to his truck, careful to bump his quarry on the way out and plant a tracking device.

Molly sat up as the pulled onto the road. “I can’t believe that worked. The fainting act is the oldest trick in the book.”