Check out the cover for Power Inversion, the next book in the Evanstar Chronicles!

Today on the site, I’m thrilled to have Sara Codair to reveal the cover of their upcoming young adult urban fantasy, Power Inversion, releasing June 1st from NineStar Press! Here’s what it’s about:

Do you have to be a monster to fight one?

Erin Evanstar is a demon hunter, a protector of humanity from nightmarish predators that feed on people’s fears and flesh. They are settling into their dual life of being a teen and hunting demons.

When a tentacled horror abducts Erin’s partner, José, Erin and their family go on the hunt to get him back. But Erin gets an ultimatum: help the Fallen Angels bring on the apocalypse or watch José die. Erin will do anything to save José, but fighting monsters comes with a grim price–becoming one themselves.

And here’s the electrifying cover, designed by Natasha Snow! 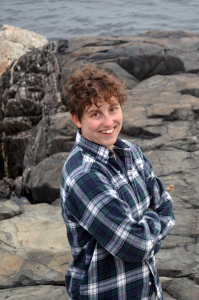 Sara Codair is an author of short stories…

Sara Codair lives in a world of words, writing fiction in every free moment, teaching writing at a community college and binge-reading fantasy novels. When not lost in words, Sara can often be found hiking, swimming, or gardening. Their first novel, Power Surge, was published in October 2018. Find Sara's words at https://saracodair.com/ and @shatteredsmooth. View all posts by Sara