Why Bullshitted Papers are Underrated

It’s the last day of class before finals. While some students have their notebooks and netbooks open, ready to take notes, others are glancing at their phone, counting down the minutes until I give them permission to leave. They’re all exhausted. Most have been working all day, yet they still showed for this last class, hoping to learn something, or get the extra-credit for perfect attendance.

Phrases like “C’s get degrees” and “Night students just want to get their A’s and get home” float through my head as I try to focus on framing the wrap up discussion.

I don’t remember how it began, but the bookworm in the back row declared that every essay she ever wrote, from elementary school through my  English Composition II, class was completely bull-shitted.

I stared for a minute, mentally rereading her essays. She was one of the strongest writers in my class, and an avid reader. She’s someone who, if I met under different circumstances, that I could have been friends with, and I don’t say that about too many people. We could read and talk about books for hours if life didn’t make us do other things.

I smiled. “Isn’t all writing bullshitted?”

The class stared at me, probably thinking I had lost my mind.

“What’s a novel?” I asked. “Isn’t it just stuff people made up? Isn’t that bullshit?”

And she thought about, and tried to explain that novels are things people are passionate about. Yes, they are made up, but they are crafted and polished before they are sold to people who live for them.

I asked her about her last essay, one exploring and defining dystopian young adult novels. She admitted she actually liked that essay, so she spent more time writing it

I smiled again. “Well, writing is better when you care about your topic. I wish all essays were open topic, but unfortunately, that doesn’t happen.”

The debate went on, growing from the concept of “bulshitting” essays to the kind of writing we do in college and its usefulness, or lack thereof, in the “real world.” While no one won it, I hope that the students left with a few insights.

The students who claim they bull-shit their papers do not give themselves enough credit. They can sit down, and think, and make words appear on the page. They can generate four or five pages of half-decent prose a couple of hours. Believe it or not, that is a big deal.

The most challenging obstacle I often face when teaching writing is getting students to
actually write. Many will stare at the screen, agonizing over each word and sentence, afraid to make a mistake or just unsure how to convey their ideas.

I told my students that if they could bull-shit a paper, then they had taken the first step to becoming a good writer. In order to write, first, people need to be able to dump what they are thinking onto the page. Second, they need to shape into some kind of genre or convention. In the case of the students, they need to revise their ideas into an introduction, thesis, body paragraphs and conclusion. Third, they need to edit it and make sure it follows the format their teacher wants.

They are generating ideas inside and putting them outside.

While I didn’t go into any gross details in class, I often compare writing to bodily functions. When I say writing is shit from bulls, I take the metaphor quite seriously.

We consume information like bulls consume grass. We digest it, just like they digest grass. We break it down and use it up. We excrete what is left in the form of words.

In a more advanced class, one filled with people who were there because they wanted to be, not  because they were required to take the course, I might get into the nitty gritty details of crafting sentences and fine-tuning arguments. However, in a first year writing course, I am happy if my students leave with the ability to put ideas on the page in a coherent manner, and follow guidelines when they turn it in.

When students get an A’s on bullshitted papers, it’s not because they fooled their teachers. It’s because they weren’t censoring themselves like the students who agonize over every sentence. Getting words down on paper is the first step to developing as a writer. Being able to bull-shit a paper is a sign that  students are already halfway up the mountain.

I can’t make someone a master writer in one semester. What I can do is give them the tools to get words on the page, and empower them. I can help build a grain of confidence.

I can  plant seeds in their bullshit, and hope that one day, there is enough shit their to make the soil fertile so their ideas grow. 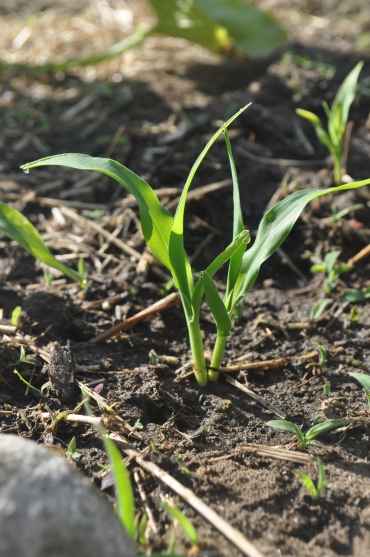