I’ve noticed that whenever a writing prompt leads me to some kind of dystopian or post-apocalyptic story, there is always nature or garden imagery. It happened with the prompt that inspired me to a story that grew into “Necromantic Buzz.” It happened with a piece of flash fiction that was published in Burning Waters Magazine, and  happened again in this week’s cracked flash competition. My story didn’t win, but it was an honorable mention.

I’m starting to think this is my way of smothering fear with hope. The political turmoil and climate problems make me fear some kind of societal upset or end of the world as we know it is coming. I’ve placed my hope for the future in nature’s resilience, and in local, sustainable food.

While the following story isn’t directly about food or an apocalypse, it is packed with garden imagery and hints at some kind of corporatism
gone wrong.

“You lied to me?” Carrots hung from Donn’s hands like the flop over ears of a pathetic puppy. “Why lie about that?”

Susie shrugged, watching the way Donn’s fingers curled around the carrots. His nails dug through the dirt and pierced the bright orange beneath. His eyes widened. He pursed his lips.

“I just couldn’t disappoint you.”

“Well, you did.” Donn looked at the red boxes brimming with carrot tops, the cucumbers climbing a white trellis and tomatoes bursting out of their cages. “If you told me, I could’ve helped.”

“How?” Susie looked down the driveway, where the bank men were coming to take the keys, the house, and its contents.

He placed the carrots on the potting table, picked up a shovel, and zigzagged through the labyrinth-like garden to a spot where nothing was growing. He dug. The bank man came with his suit and guns.

“Sir and madam, you must vacate the property.”

He watched as Donn dug until he hit a wooden box, brushed it off, opened it, and pulled out stacks of green bills. “Now, what is the conversion rate for old USD these days?”

Donn handed a banded stack to the to man. “Here are 20 for your bank, and 5 to keep. Get off my property. I’ll expect the deed tomorrow.”

The man scurried off. Donn glared at Susie. “Next time you have problems, tell me.” 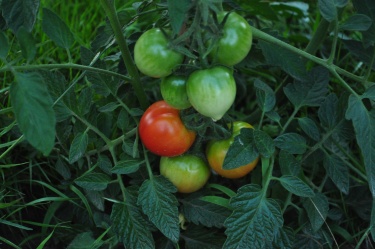 Sara Codair lives in a world of words, writing fiction in every free moment, teaching writing at a community college and binge-reading fantasy novels. When not lost in words, Sara can often be found hiking, swimming, or gardening. Their first novel, Power Surge, was published in October 2018. Find Sara's words at https://saracodair.com/ and @shatteredsmooth. View all posts by Sara

3 thoughts on “Dystopian Gardens / Micro-Fiction:Lying in the Dirt”